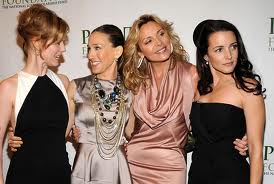 Sex and the City is a bit like a bubble bath to me; with baths I know I should love them. I am a girl so it’s practically my birthright to crave a bath at the end of a long day. Yet to be honest, I find them a bit frustrating; I slip around like a seal in them because I’m not long enough to recline elegantly a la movie star, They are either too hot or too cold, I get sweaty and its hard work keeping my hair out of the bubbles and keeping the requisite book/magazine dry. I’m more stressed out after a bath than I ever could be going in. Sex and the City is a bit like that; I know I should love it and I do, in a way. It’s like fast food – unharmful in small doses and pretty great during but you get left with a guilty, unsatisfied feeling afterwards. 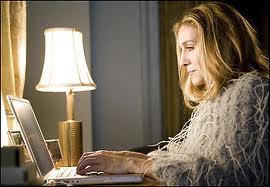 The whole show was kind of marketed as a feminist alternative to the frothy rom com programmes doing the rounds. It shows four girls, sleeping their way around New York, enjoying fashion and each others company as well as managing to hold down dream jobs. Yet, in reality it’s kind of depressing. Four girls trotting about town in outfits that cost more than some cars, hell throw in bags and jewellery and some of the outfits probably cost more than some houses is a bit warped.  The idea that we are all a bit like a Sex and the City character is laughable as no one really is – they are parodies. 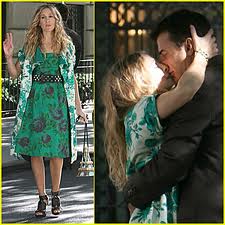 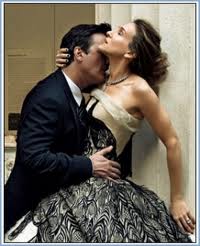 Carrie is self obsessed and spends half of her time buying clothes a normal writer couldn’t dream of and the other dissecting every interaction she  has with a man. She crashes from one dysfunctional relationship to another, always bouncing back to Big, an arrogant, selfish character that belongs in a bad 50s movie and is hailed as some kind of second coming. Their relationship is such a drama, it’s painful and devastating for her. It is almost uncomfortable to watch some of it, as she bends over backwards for him. Her whole being is wrapped around him. When she shouts ‘why is it so hard for you to factor me into your life in any real way’ I felt hurt for her and yet she always goes back to Big, sets him as the standard to be reached with her other partners and even cheats on Aidan with him. They are like addicts, crawling back to eachother, bringing each other down and filling each other up except he seems to deal with it better than her. 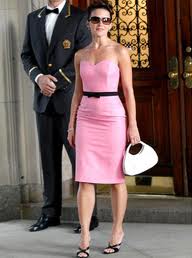 Charlotte is one of my all time style crushes but her character frustrates me as equally as her wardrobe delights me. She is obsessed with being married and having children and completely subscribes to the traditional hegemonic view on femininity; she is submissive, shown to spend her time concerned with decorating and arranging the flowers in her million dollar apartment and is willing to give up her job for her husband. Annoyingly, Charlotte is the character I believe the most because I can see how it would happen. She is as determined as Samantha, as head strong as Miranda and as wistful and contemplative as Carrie. 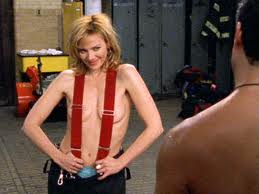 Samantha is one of my favourite characters on tv. She is brash and loud and vulgar and dresses like a five year old child has been let loose on the set on Dynasty. She has sex and doesnt care about relationships or emotions – except that of course she bloody does. We learn that she has been hardened through losing the love of her life – some hideous beast of man who cheated on her. We learn that she is afraid of commitment with the teetering, baby step way she toddles into life with Richard who then cheats on her. We then see her stake out her territory with Smith, who she then cheats on.  I do think that as a character she is great but she is also so frustrating. The kind of loveless, detached sex she has seems so cold and bare and whilst you could argue that it is empowering to see a women having sex the way she wants, is she really? Again she has the kind of glossy, airbrushed sex I mentioned before; the second a guy climbs on top she is writhing in ecstasy and screaming out loud and her orgasms come quick and fast. Lucky lady. Despite the original book being written by a women, the shows producers and writers are mainly men and you can really tell in the way the sex scenes are done.  It’s hard to believe them and even harder to see how most of them even come about. 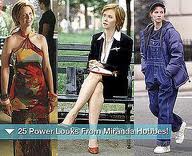 Oh Miranda. She had so much potential! She subverts and resists traditional gender roles in the way she succeeds in male dominated environments such as property and law. She enjoys her own company, she dresses in an androgynous way in the earlier seasons, she even utters the immortal line “How does it happen that four such smart women have nothing to talk about but boyfriends?”

And yet – oh wait she gets married. Now i’m not slating marriage but it seems like the biggest cop out ever that all four characters had to be settled at the end of the show. Carrie was ‘rescued’ by Big who pulls his finger out of his ass long enough to mumble ‘you’re the one’ on a bridge in Paris (obviously) Carrie nearly wets herself with glee and that’s her all wrapped up nicely. Charlotte falls for her divorce lawyer and after converting to Judaism and demanding an engagement ring gets married and adopts a baby from China. (by the way, my aunt and uncle adopted and it took them five long harrowing years but lets brush that under the carpet and assume it is as easy as its made out to be) and Samantha – the independent sexual man eater, gets cancer, survives it looking pretty damn good and ends up settled with Smith whilst Miranda has a class conflict battle with barman Steve but wait it’s ok because he ends up owning a bar so they are on the same level finally and then they get married. It frustrates me that in the end, the writers felt they had to conform to the hollywood happy ending prescription diet and give all the characters a knight in shining prada who rescues them by giving them their ‘other half,’ their ‘plus one’ . It’s like all of the other stuff is irrelevant – the struggle for Miranda to become a law partner, the road to Carrie becoming a published author, Samantha becoming successful and sought after and Charlotte climbing the Art Gallery ladder – like that is is by the by, fodder to fill the time before the real goal was achieved – snagging a man to make everything worthwhile.

Sure, the programme deals with issues like divorce, infidelity, cancer, abortion, death, single motherhood but all of these things seem to pale in significance to the central dominant theme of their relationships with men. Their self worth is defined by how successful they are with men and I think that is such a shame as the programme had potential to be more than that. Most problems are paid to go away – In the second film I nearly walked out when Miranda and Charlotte were lamenting how hard life was as a mother despite both having superb full time help.

I do like the way that the women discuss sex and expect sexual pleasure from their partners – this is something that really should be celebrated. We should see sexual fulfilment as a right – after all men do. Yet, the follow through is bollocks as the sex demonstrated looks as fulfilling as a smack in the face. I also love the way the girls are each other’s rocks and sources of support – an urban family. That feels real; I know how much I rely on my friends and turn to them all the time. They provide each other with moral, financial and emotional support and whilst the men are a bit come and go, hit and miss, the four of them are constant. For that reason, Sex and the City is a triumph. It shows friendship and talks about the fact that women are sexual beings who deserve great sex. Though so much of it is a disappointment, I guess the success is due in part to the fact that women can identify with the relationships the women have with each other.

Also, this outfit is perfection 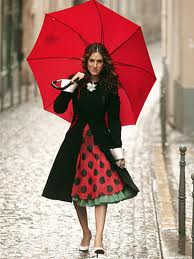