You Do Have Bleeding Tragic Taste In Men. 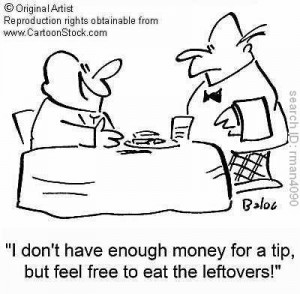 After reading a post in off_highstreet about tipping, it really got me thinking. I hate the concept of tipping and very rarely do it. I have friends who tip all the time, in bars, restaurants and taxis and then I have friends who agree with me and don’t tip at all, ever.

If I like a top in Miss Selfridge and it costs £40 I don’t then go up to the till and say here, have £45 because it’s a really great top, do I? No, I pay the price that is stated. Just like I wouldn’t tip the employer who serves me. I assume that they are being paid by the company. It is the same in Mcdonalds – I pay the price stated and don’t leave the server any extra cash. That is the thing with tipping – people are so selective with who they tip. Hairdressers, waitresses and taxi drivers – tip. Everyone else in the service sector – no tip. How is that worked out? How is that fair?

One of my closest friends is a waitress and she gets so angry with me when I refuse to leave a tip in restaurants, telling me that waitresses rely on those tips to make ends meet. Sorry but what?! Lots of people work on minimum wage and survive. I have worked as a silver service waitress and in a busy clothes shop on weekends and I can tell you that both are bloody hard work. Sure, in waitressing you are rushing around, carrying heavy plates but in a clothes shop you are running to and from the store room, clearing the rail, folding and refolding the same jumpers, and it is still very demanding and tiring. Both jobs require you to deal with angry, irrational customers in a polite, calm way. Both jobs expect you to work hard and be on your feet all day. You will probably take home the same pay for both jobs yet only waitressing will see your pay topped up by people leaving you extra money for following your job description. It is bollocks that we pick and choose who we deem worthy of extra cash. 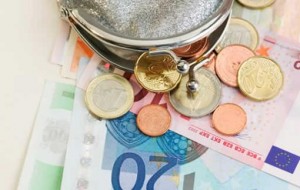 When a person decides to be a waitress or a hairdresser or  a taxi driver they are agreeing to the pay offered and the conditions of a job. It frustrates me when people say oh but tips top up their pay to minimum wage. No – everyone is entitled to minimum wage. In this country, everyone will earn a certain amount if they are working. Also, it should not be our job to make their pay fair even if they didnt get minimum wage. It is up to the company they work for to look after their staff, not the customers. We already pay an inflated price on restaurant food, we already pay over the odds for a glass of wine or pint of beer so why do we feel the need to pay even more? Getting a taxi home costs a lot more than the bus yet we give him a tip and not the bus driver who has to deal with crowds of unruly revellers.

Another thing that annoys me is that people leave tips to say the service was good. Well it bloody should be. I expect a waitress to be able to take an order, be polite and get my food to me in good condition. If they do that they aren’t providing me with a great service – they are providing me with the service their job expects of them and which they agreed to do. I don’t get parents tipping me when their child passes an exam. Doctors don’t get a tip when they prescribe you some painkillers. The people in Mcdonalds don’t get a tip for getting your order right and giving it to you quickly. The people in Topshop don’t get tipped for being polite, helping you find an outfit for Saturday night and handing you your items in a carrier bag. We tip the people who colour our hair, and who drive us home at the end of the night but we don’t tip the people who hand over our late night chips, who sold us the make up we are wearing or who keep our coat safe in the cloakroom.

I just don’t understand it. Either we want to reward the great service we receive in which case we should be tipping everyone who helps us on a daily basis – the staff in Costa, the drs, the bus drivers, the tube staff, the clothes shop assistants, the people on the tills in Waitrose, the man who empties our bins, the teachers, the nurses etc. Or we feel guilty that the people are on minimum wage and feel like we ought to pay more – which means we should be tipping all service sector jobs that pay their staff minimum wage: tipping in Mcdonalds, Topshop, Sainsburys, etc. Or we think that the job is hard and should be rewarded in which case we should be tipping all hard jobs! How do we define hard work though – is it just the people who are on their feet all day or are people that are really challenging their minds included?

I hate the fact that people who don’t tip are considered rude or tight. I don’t tip because I find the concept degrading and outdated. Unless someone goes above and beyond in their role I would never leave extra money -because that is exactly what it is! It is like paying more for a top just because you like it. That idea is laughable yet paying extra for a meal is not. I love eating out but it is expensive so I don’t feel the need to pay more. I already pay an inflated price.. A pizza costing £12 is already making the company a profit which in turn should benefit it’s staff. The only argument I ever hear is that the people are earning such a low wage – well yes but so are a lot of people who do not get tipped and I don’t see you reaching into your pocket to reward them. 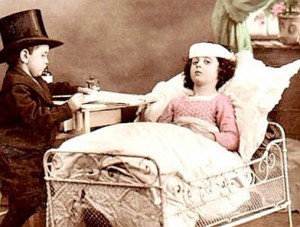 – I am ill today; its horrible. I have been sleeping for most of the day and trying not to be sick. It is horrible. I just want to curl up and wallow in self pity!

– Lots of people are reading my blog now according to google analytics  which is nice – if you are reading this, please follow my blog if you don’t already. I love reading people’s blogs, it is insane to think of how blogs have taken off recently.