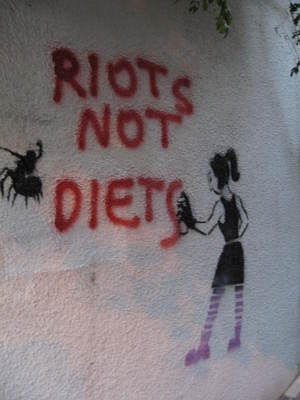 In this months Company magazine there is an article titled ‘The new OCD – obsessive calorie disorder’ outlining how 70% of us feel guilty every time we eat something. More than that, 76% of us have been on a diet, 80% of us worry about being fat and only 5% said they would be happy being a size 14. Not one person said they’d be happy being any size larger than that which is pretty fucking depressing in my eyes as the average size of a woman in Britain is a 14. These statistics come from a survey conducted by Company magazine called ‘eating isn’t cheating (thanks for that).’ They don’t tell us how many people completed the survey or the demographic involved but they do tell us that 50% of those surveyed have experienced an eating disorder and only 10% of the people are a size 14 or bigger. We also get a fantastic ‘diary of a calorista’ which shows us a day in the life of a calorie obsessed 23 year old woman who fantasises about marmite on toast and beats herself up about eating a packet of crisps. I want to scream ‘fuuuccck’ really loudly for two reasons; the first because I don’t think any of these figures are an exaggeration and the second because this makes me feel so irreversibly sad for the state of womanhood today. When did we start caring more about what goes into our mouths than what comes out of them? When did we become a nation of women denying themselves proper meals and starving our bodies of nutrition in the quest for a single digit clothing label? There’s got to be more than that, right? 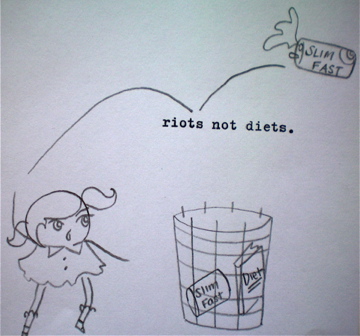 A few things piss me off about this article. The main one is that despite it going on about we should all be healthy and ’embrace our curves’ and how a size 14 is the national average it manages to piss all over itself by refusing to have a SINGLE BLOODY WOMAN in the whole magazine who represents that size. It seems ironic then that they can get on a high horse about the dangers of eating disorders and how we need to find a healthy relationship with food and our bodies and yet continue to encourage a hegemonic feminine ideal by only showcasing models with a bmi lower than how much I give a crap about the size of my ass in relation to how academically successful and proud I am of myself. The ‘calorista’ in question is so tragically sad that I want to smack her round the face and hug her and never let go in equal measures – in a few hundred words she manages to tell us that she doesn’t want to look like a ‘scoffer’ in front of her boyfriend so goes for a soup and denies herself some prawn crackers (seriously love, live a little yeah?) all whilst worrying if her tummy looks flat. I’m not convinced of the longevity of that relationship but one thing is for sure; her relationship with food and herself is pretty fucked up. I’m guessing, sadly, that she isn’t alone in mentally counting up the calories of everything that passes her lips though. We are obsessed with it. Slimming World, Weight Watchers, Atkins, Zone, blah blah blah have made people rich by cashing in on that vulnerability we all have in us. And who peddles it? They do. Of course they do – they want our sodding money. Something that stood out for me in the article was the fact that half of the women thought that men didn’t fancy them because they were overweight ( as 90% of them were a size 14 and under this seems ridiculous) and a fifth thought that dieting would bag them a bloke – somewhat cruelly, 43% of the women surveyed were single. Surprise, shock horror. I’m guessing that that is a result of them being surgically attached to a calorie counting book and spending cosy nights in front of the telly slurping soup and breathing in. 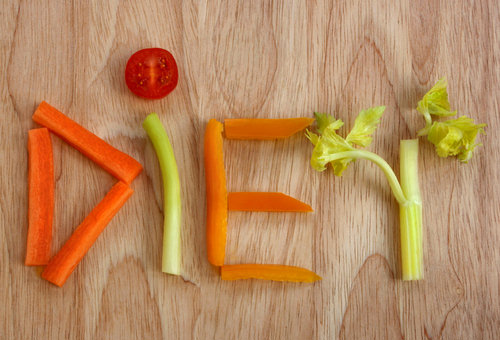 Seriously, I could write about this for weeks and still have so much to say. I hate that magazines shake our hands whilst smacking us round the face at the same time; an article that on the surface is promoting a healthy body image is nestled nicely between airbrushed images of Cheryl Cole selling hairspray, make up companies selling us digitally enhanced complexions and articles telling us how to be a good date and snag a man. My opinion is that we wouldn’t need an article telling us how to love ourselves if the magazines made it a bit easier to do so by showcasing women of all sizes, talking about something other than sex and how to please a man and made more of a big deal of achievements that have nothing to do with appearance. Instead of a how to guide on applying the perfect sodding blusher, why not have a section about successful women in industry or women who have made outstanding contributions to science? Why not try something radical and promote a healthy body image by implying that we are worth more than how sexy and thin we can make ourselves? That would be nice. 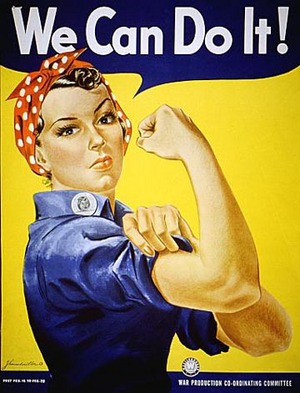