Pepsi have ignored the old ‘if it ain’t broke, don’t fix it’ slogan and gone ahead and redesigned their Diet Pepsi can. They are billing is as a  ‘taller, sassier’ drink for ‘beautiful confident women’.

A lot of people on Twitter have slammed it, some calling for a boycott of the brand, others condemning the can shape. I personally feel that it is a depressing representation of the standards viewed as attractive in society today; thin = beautiful. Pepsi seem to be cashing in on the idea that women will be drawn to anything suggesting thinness and beauty. The can will be rolled out from next month so look forward to seeing it snuggling up the plumper cans.  Defending themselves after the Twitter backlash, bosses had this to say ‘Diet Pepsi has a long history of celebrating women through iconic fashion imagery seen in our infamous and historical campaigns, and we’re proud to continue that tradition as an official sponsor of Mercedes-Benz Fashion Week,’ PepsiCo’s Jill Beraud said in a press release. ‘Our slim, attractive new can is the perfect complement to today’s most stylish looks, and we’re excited to throw its coming-out party during the biggest celebration of innovative design in the world.’ The part I hate is the words ‘ slim and attractive’ By throwing them together like that they are making assumptions and encouraging people to carry on that pairing with their bodies.

Feel sorry for Alexandra Burke who, today, was criticised for her stage outfit choice by The Daily Mail.

The title of the article is ‘Not your most flattering look: Alexandra Burke squeezes into unflattering shiny silver leotard’ I would hate to be famous; every single thing you do or throw on in the morning is dissected, criticised and analysed. I think Alex looks great; happy, confident and doing something she loves. Part of the criticism I feel comes from jealousy. Women just don’t seem to support each other any more. We feel duty bound to pull other women apart for whatever choices they’ve made. I’m not suggesting we hold hands and braid each others hair on a daily basis but, and to quote Mean Girls, ‘ Calling somebody else fat won’t make you any skinnier. Calling someone stupid doesn’t make you any smarter.’ I kind of think that in this constant quest to be perfect that we all seem to be on, we have forgotten to be nice to each other, and instead just tear into one another in the hope that making someone else feel crap will make us feel less so.

Alex had her choice of dress called ‘clingy’ and the reporter wrote that ‘there was no evidence of the six pack Alex showed off with JLS’ Big deal. Her body still looks hot to me. Whilst criticising Alex’s stomach, they manage to compliment and show us what we should look like with images of Ciara 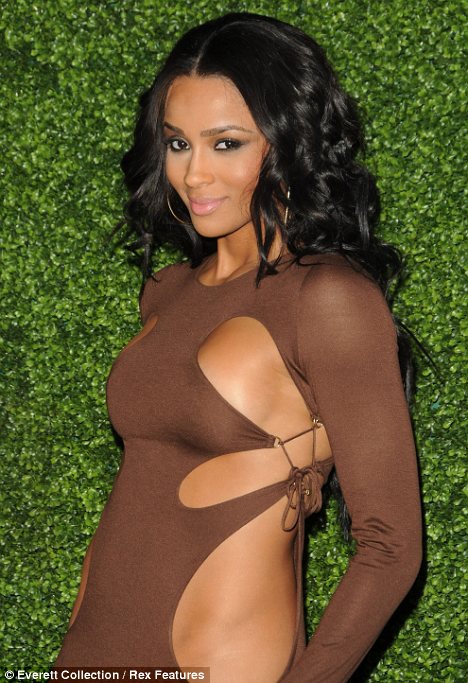 I don’t know how much the reporter was paid to write this but the article states ‘ As the saying goes – if you’ve got it, flaunt it – and Ciara had no trouble abiding by that motto as she took to the red carpet last night. The 25-year-old singer looked fabulous in her floor-length cut out gown which displayed her toned and trim physique. The tight dress showed off her curves , in all the right places, and the mocha colouring complemented her skin-tone perfectly.’ Well, great for Ciara! She does look gorgeous, and yes her stomach is lovely but why does that have to come at the expense of another woman? Why does this article come alongside one tearing Alex apart because she doesn’t look like this? It is ridiculous. Another thing that pisses me off about this whole article is that it details how Ciara has apparently been dropped from her record label and yet by referring so much to her figure and aesthetically pleasing appearance it is as if they are saying that it doesn’t matter; she is beautiful so what else does she need to be? It is another example of how women are only defined in terms of their attractiveness – sod the fact that she might be unemployed, potentially unhappy and at a loss; she’s fit so who cares.