You’re Only As Good As Your Worst Intention 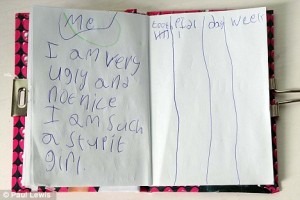 In the Mail today is a story about a mother who found her six year old’s diary littered with self criticism and self directed anger. I was surprised by how angry this article made me for two completely different reasons.

The first is that this little girl has for whatever reason internalised the self deprecating views most women hold about themselves already; she is angry at her body, her appearance and this is tragic; she is six. Just a baby. How is it possible that we are living in a society where six year old little girls are already subjecting their bodies to a process of loathing and hatred? When i was six I don’t think I was even aware of my ‘body.’ Sure, I knew I had one but I didn’t think about it in any real way – it was just my body. Now we have teeny tiny girls decked out in cropped tops, sparkly padded bras and wearing more make up than adults. It makes me sad for the future my children might have.

The second reason I am so angry though is the complete lack of respect the mother has shown for her daughter – who is obviously going through some issues. To blast her across the pages of a national newspapers with her full name, photos and description of her personal diary ( which she shouldn’t have read if we are being totally honest) is completely beyond my comprehension. I abhore the obsession some celebrities seemingly have of plastering their kids faces and life stories everywhere; those children are innocent and deserve privacy. You may have chosen a life in the public eye but they have not made that choice. Respect that. When this girl grows up she will have sections of her life easily accessible through google; her friends will see it. Any self esteem issues she may have had will be tripled now as strangers up and down the country read about her personal issues with her body and that makes me so mad with the mother; maybe the allure of a paycheck was better than the thought of dealing with her daughter in a more personal manner.

The mother says ‘ I know that reading someone else’s diary is the ultimate act of betrayal. But I couldn’t resist taking a peek. After all, Sophie is only six. There were hardly going to be any earth-shattering confessions lurking between the pages of her pink Barbie diary, were there?’

I hate the way children are so sexualised today; everything they are subject to is drenched in it – music videos, magazines, films like Sucker Punch that get a 12 rating ( what the fuck? It screams wet dream material) it all contributes to young children getting such a warped idea about their bodies, sex and the opposite sex. It breaks my heart that this beautiful little girl hates herself. It hurts more to think that she isn’t the only six year old keeping a diary like this.

One of the people commenting on the article had this to say ‘ Since the day my daughter was born, I have been careful to say nothing negative about my body. The other day – aged 7 – she poked my tummy and laughed and said it felt squishy (I am slim but after three kids, it’s squishy!) to which I replied, “That is my favourite part of my body because its where all my delicious food goes and it’s where my three favourite people grew – what an amazingly clever tummy!”. Meanwhile, of course, I’m cursing the squishy tummy, but I’d never let her know it. There is WAY too much pressure on little girls, we need to model positivity and self-confidence for them.’ I wish I could find her and give her a massive hug and say please carry on.