I’m Not What You Anticipated

You might have heard of a ‘slut walk.’ On a side note, I hate the term ‘slut’; try as I might to ‘reclaim’ the word, I just can’t. It is a word used as a weapon against women, it is a word used to hurt and humiliate yet I applaud the fact that women are fighting to break down those barriers we have against the word. This weekend women came together to protest against the media’s incessant victim blaming in sexual abuse cases and to subvert the notion that women in promiscuous clothing ‘are asking for it.’ 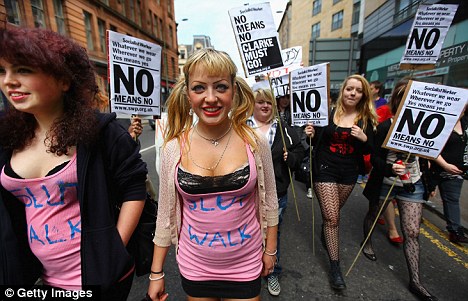 Anyone can be raped; in a sociological study where rapists were interviewed many said that they chose the inconspicuous girls; the ones wearing jeans and a hoody, who didn’t stand out. You wouldn’t remember her walking past you whereas the girl in the short skirt and low cut top would stick in your mind. That pisses all over the media’s idea that anyone in a bodycon dress might as well be wearing a ‘rape me’ sign on their forehead doesn’t it? And yet, despite this and despite the fact that we know that rape and sexual abuse can take place anywhere, whilst you’re wearing anything, the media continues to victim blame. Stories come with a blow by blow account of how much the victim had to drink or what she chose to wear. Victims have their personal life dragged up, their past relationships. Everything out in the open for us to tut and judge and for someone to say ‘well, she deserved it.’

She didn’t. No one does. I am fucking tired of reading about how to keep myself safe, how to keep myself protected and how to make sure I don’t encourage anyone or lead them on. Why are we not teaching men not to rape women? Why is it our responsibility, once more, to protect ourselves from someone who doesn’t know the meaning of the word no? And why is it ok for police to second guess everything a rape victim says? Why do they even need to know what she was wearing?

How is it relevant?

Today Melanie Phillips wrote about the recent slut walks in her column for the Mail. She had this to say, ‘These narcissistic stunts are yet another frivolous distraction by those who take advantage of the unprecedented freedoms won by others as they wrap themselves in the mantle of victim.’ Sorry love but what? I don’t think that the women involved in the marches for one second forget about the battles feminism has fought, and won in the past – I know I am grateful for everything much braver women than me fought for. But are we supposed to play dead now? We have the vote and semi equal working rights girls, time to lie down and say job well done? No, of course not. Like women before us, we are fighting against the injustices we face. As is our right. So our daughters will have a better time of it because of our actions now.

Phillips goes on to say this; ‘After all, if you walk across a motorway and get knocked down by a car, or if you leave your house unlocked and it is burgled, no one would say you ‘deserve’ to be killed or burgled. But a reasonable person would surely say that it was reckless to cross the motorway or leave your house unlocked. In other words, you must take some responsibility for what happened to you.’ This paragraph leaves me so angry that I feel numb with it. How can you trivialise something like sexual abuse; something so violating, oppressive and compare it to being burgled? And how dare she imply that women should take responsibility for their being attacked. It isn’t right that women live in fear of being attacked; the young girls I teach often say that it is their biggest worry. And no wonder when we hear the terrifyingly high attack statistics contrasted with the worryingly low conviction rates. What the slut walks do, or at least attempt to do, is hand back some of that power to women. They encourage women to stand up and say, you know what? I am not to blame and if I am attacked then I AM a victim, regardless of what I was wearing or drinking or saying.

Women like Melanie Phillips should be ashamed of themselves for joining the side of those who turn attacks around on women; who would rather find the woman lacking or in the wrong than face the fact that we have it all fucked up here.