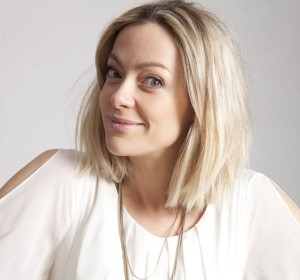 Cherry Healey; I adore her so much and normally love her BBC3 programmes where she takes an issue like pregnancy, breastfeeding, parenting, money etc. and then interviews a wide range of people about their take on it yet I feel so massively disappointed by her latest offering; Cherry’s Body Problems.

With all the others I really felt like she took a neutral stance and got an array of views on an issue; with parenting she interviewed protective parents, parents who smack, parents who spoil, parents who let their children do what they want, in their own time: With money she spoke to a self made millionaire, a wag wannabe, a freegan and a mother living on the breadline etc. and even though the programmes are quite ‘frothy’ and faux high brow I usually come away with a few things to think about and respecting Cherry for throwing herself into the interviews and coming across as considerate and interested. The body image one though was fucking shocking – Cherry complained about her body hang ups, gave us the calorie content of her fridge and told of how being 9 stone 2 was a tragedy and then rocked about town interviewing a range of women who were diverse only in the fact that they got progressively more infuriating. The only woman she interviewed who wasn’t wearing a single digit dress size was a plus size woman who had to endure Cherry eyeing her like she was an animal in the zoo and patronisingly going on about how ‘brave’ she was and how she could never do what she is doing. What? Reject the fucked up notion that women should all look the same and crave a washboard stomach and legs like a giraffe?

The point of the programme, I thought, was to investigate the different body shapes in society and try and understand the relationships women have with their bodies yet Cherry didn’t really do that at all. Instead we kind of got the same body story over and over again; First Cherry hit up a beauty pageant where she met lots of thin, tanned girls who seemed to base their self worth on how they looked in a two piece. She hung out with a group of preened twenty somethings who were all a size 10 or below who hated their bodies and wanted surgery. She hung out with two sisters, both of whom sported the fake tan, long hair and thin limbs of the group before and who also hated their bodies and wanted to change them. Cherry then met a thin, toned dancer who wanted bum implants. She went on to meet a mother who had recently given birth and chose to hit the gym at 5 every day to exhaust herself into a size 8. She finally met a naturist who only found self love through losing weight. What the actual fuck? Where are the size 12 and 14 women? I know there are some in the world for God’s sake. It felt patronising. It felt ridiculous and like being hit over the head by a copy of Cosmo for an hour. 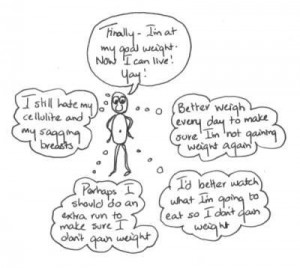 Yes there is a fuck load of pressure on women to look a certain way and yes the expectations we face are insane, unnecessary, masking a bigger issue of inequality in our society but there are also lots of women around who do love their bodies and who should have been given an opportunity to share that. What Cherry gave us was a very one sided view; her view really – just supported by some young girls who don’t really know themselves yet and are influenced by media. The fact that this pressure exists is horrendous and we are all slaves to it at some point I’m sure but Cherry had an opportunity to fight back and showcase some women with a bit of variety going on and who had really healthy relationships with their bodies. We all know the moral of her story; everyone has something they’d like to change blah blah blah but COME ON. Couldn’t we please have a programme about body image that shows us more than just one type of body? Throwing in a body builder and a token plus size lady doesn’t make this programme representative of women today and I think it would have been better to show us some girls who love their bodies AS THEY ARE; not despite something or after a diet or in certain lights but as they are. It made my heart hurt to see woman after woman pulling themselves apart, selling themselves short and wishing for things to be different, interspersed with Cherry neurotically weighing herself daily and reading us snippets of her self deprecating, self loathing diary. I think that Cherry wanted to show us that all women have hang ups despite outward appearances but I think the point was completely missed by the fact that the women we met were all so similar and had such singular goals and body ambition. I’m so tired of seeing the same body type being rolled out over and over again in the media; the pressures exist because we don’t do enough to challenge them and fight against them and this programme sadly seemed to me to be reinforcing the idea that women should be a certain way, want certain things and that anything else is ‘other’ or something to be incredulous about. We need to start recognising other body shapes and celebrating them – or at the very least showing them on prime time TV.