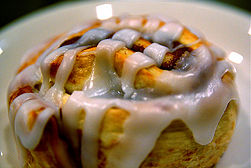 Most meals out with my girl friends come with a free side order of guilt; choruses of ‘oh I’m so naughty,’ ‘no, I couldn’t’ and ‘go on then, just one more mouthful’ are all the rage and when the waiter offers dessert the reaction is the same as if he had declared he enjoyed running over little old ladies in his spare time. Deciding what to eat is a complex mission of navigating the menu totting up calories and ‘food math’ – drinking diet coke gets me a starter; a glass of wine is fine if I don’t eat the bread etc.

I have always had a messed up relationship with food. I have talked about my battle with an eating disorder on here before so I won’t go into too much detail again, suffice to say that being fed through a tube is only marginally less satisfying than sitting opposite a bunch of beautiful girls too afraid to finish the expensive meals they have ordered. When I first started uni I only ate cereal and crackers. Literally. Looking back, I wasn’t ready to leave home and should have stayed longer as an outpatient at the hospital I was admitted to during my A Level years but I disregarded all advice and went anyway. As it turned out I got pretty sick again and that, along with some other reasons saw me drop out and go and stay with my friend at Southampton uni where I ended up doing my degree. I look back at my life and whilst I don’t want to use any harsh words like regret, I feel massively sad at the amount of time I dedicated to worrying about my body and my weight. I feel like I have suffered a loss of so much more than a bit of stomach lining, some tooth enamel and my common sense. 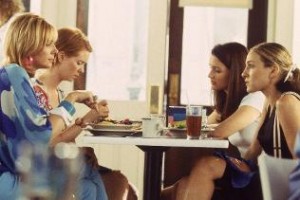 Programmes like Sex and the City, Friends and Gossip Girl show us beautiful women eating out or ordering in every night of the week; magazines, books and stereotypes dictate that as girls sometimes only chocolate and wine will do and so it seems that we are bombarded with images of food as a luxury, as a treat, as a reward, as a way to celebrate or commiserate, or to relieve period pain/heartache/stress and yet we are also confronted, on a daily basis with diets, weight loss tips and unrealistic body types. We exhuast ourselves up trying to look a certain way and then reward that the only way we know how – with food. So many of the things we see as rewarding and worthwhile involve eating; a romantic night out, a girls night in, a picnic lunch in the park for example. We go to the cinema and eat popcorn and ice cream. We go shopping and stop for coffee and cake. We deserve those things, we tell ourselves despite the fact that we will use those ‘lapses’ to beat ourselves up with later on and it is so fucked up. So unbelievably fucked up. 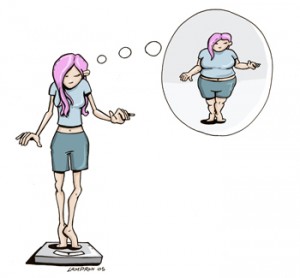 How many hours and days have I spent staring at myself in the mirror, weighing myself, tearing clothes off me because they look horrible, mentally counting calories in the supermarket, looking at other girls and hating myself? And why? It might sound all American movie of the week but if you look in the mirror and are unhappy with what you see, losing weight wont make that better. I know people who have lost lots of weight and just moved on to the next thing to hate about themselves. I have been that person; teeny tiny and looking in the mirror, crying because I hate my shoulders or my nose or my knees because it isn’t losing weight that will make me happy; it’s sorting out my head and realising that I’m not weighed down by exra pounds but by emotional baggage – the hardest to shift. 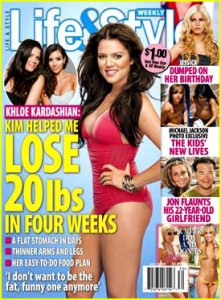 I hate that in society today most women I know have an unhealthy relationship with their bodies and with food. I might be wrong but it doesn’t seem like this issue affects men as much; my partner doesn’t hate himself for days after a big meal out. My male friends don’t mentally count the calories in a malteser or glass of squash – they just get on with it. It seems like girls dedicate so much time to thinking about food; what to order for dinner, what to eat for lunch, where to go for a birthday meal. They walk around totting up what they’ve had so far that day and thinking about where they can cut some corners to make up for the secret chocolate bar they munched at 2pm. It frightens me so much, terrifies me to my core that a national newspaper can quite happily dedicate column inches to articles written by neurotic journalists who slate other womens’ bodies further fuelling the fire. It hurts me that magazines circle the ‘flaws’ of celebrities in a half arsed attempt to make us feel better about ourselves when the one thing we really need is for there to just be a balance. A world where more than one body type exists in the media so women don’t hate themselves for being a size 12. A society where the ‘female’ section of a newspaper contains more than diet tips, poisonous articles and clothes to ‘flatter your figure.’ We need to stop seeing food as the enemy; stop feeling guilty for ordering a pudding or cleaning our plate.Our relationship with food would probably be a lot healthier if we just relaxed about it. It would be nice to have women on tv who order a meal and look like they actually eat it for a change.

you can find amazing big boobs