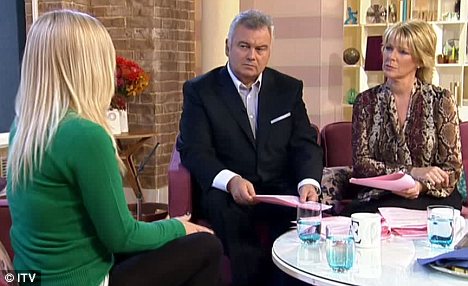 I can’t really put into words how angry Eamonn Holmes’ flippant comments on This Morning have made me; talking to a rape victim on the show today he asked ‘why were you tempted to walk home?’ and ‘I hope you take taxis now.’ What this does is put the blame squarely on  victim Hannah Cant’s shoulders instead of where it belongs; on the low life who raped her. It is not our job as woman to control men’s sexuality. We shouldn’t feel obliged to take taxis around town, to avoid walking at night, to hide our bodies behind baggy layers. We shouldn’t have to monitor and control our behaviour and actions in order to ‘avoid being raped.’ We should be able to live in a society where the blame falls with the perpetrator and not the woman in the equation.

What comments like this do is encourage us to start questioning Hannah; why didn’t she take a taxi? It makes people start putting some of the blame on her which is completely and utterly fucked up and makes me so mad I could scream. Did she ask for it to happen? Did she bring it upon herself? No she didn’t; a rapist, criminal, made a choice; not her. By even mentioning her choice to walk, by even bringing it up is taking some of that responsibility away from him and putting it smack bang on her. Did you know that less than 6% of women who report rape to the police see their attacker convicted of rape? This figure is laughable – almost as laughable as the fact that about 40% of rape victims don’t report the incidents: When we have idiots like Holmes, on national TV, questioning a woman’s motives for walking home after a night out, it is no wonder that victims are afraid to speak out. We seem to take pleasure in tearing other woman apart; it doesn’t matter what Hannah was doing or wearing, how many times she has had sex in the past or even if she had met the rapist previously; no means no. It means stay the fuck away from me. Isn’t being raped bad enough without having to deal with bullshit like someone telling you off for daring to think that in 2011 it is safe to walk home after a night out with your friends? I despair.