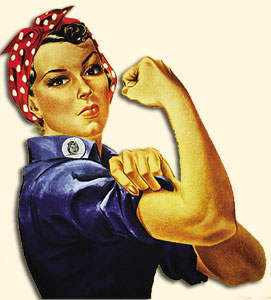 Yesterday I went to a Feminist conference with some friends of mine. The whole day was organised by a women’s liberty group and was billed as ‘A conference to debate the issues facing women in the era of capitalist crisis and cuts, learn from past battles and revive a class struggle feminist movement. Organised by women members and supporters of the Alliance for Workers’ Liberty.’

Overall, I really enjoyed the day – I took a lot away from it and it left me asking a lot of questions which I think is positive.

– Why are women facing the brunt of government cuts? They are the ones who usually end up taking time out to raise children, care for elderly relatives or work part time and so end up with smaller pensions and are also the ones who are hit hardest by welfare cuts and changes.
– On this issue; why do we not encourage women to work by offering affordable childcare? When a childcare place is more than the average take home salary we are forcing women to make choices they don’t want to have to make; have children and struggle, feel guilty and constantly worry about money or choose not to have children until we can afford it, potentially running the risk of leaving it too late?
– Why aren’t children taught about sex and relationships in schools properly and in a way that isn’t embarrassing or awkward? We have the highest teenage pregnancy rate in Europe and yet children are not being taught about safe sex, how to get access to contraception, impartial abortion advice etc. We have an increasingly sexualised media and yet are not teaching children how to deal with the feelings or questions that arise from this.
– Why are women still struggling with sexism in the workplace? What happens when the people in charge of challenging and tackling this sexism are men who either deny or ignore it? Is it worse if women are in charge and tell us to just get on with it?
– Why are women attacking each other all the time? What happened to the sisterhood?

There were some parts I didn’t enjoy. I am not a socialist and so found the anti capitalist lectures a bit draining; almost forceful in their execution. It was interesting to hear from a woman who is part of Occupy London and to hear from women who run charities or trade unions in their areas. I also didn’t think some of the situations were very conducive to change; they felt quite negative and like a place to moan rather than encourage positive action. I also hated the subtle age bashing that went on; some of the older women made a few flippant comments about how ‘young’ we were which made me angry – surely we should be supporting and encouraging each other and not pitting groups against each other within the feminist movement? There was also a bit of teacher bashing going on in relation to the upcoming strike which pissed me off not end. Overall though I really enjoyed the day!