Hey sweetpeas, my blogging break was much longer than I anticipated! I am back now though and on summer holidays – hooray! 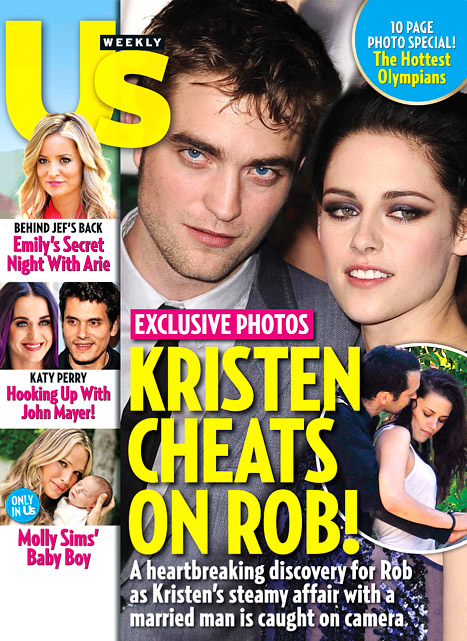 I could write this post by just copying and pasting the one I wrote about Imogen Thomas and Ryan Giggs – simply changing Imogen’s name to Kristen would be enough as both women have been treated in the same way. I don’t know who (else) Rupert Sanders is shagging but he must be simultaneously jacking off Rupert Murdoch and Ted Turner as his ability to escape from this whole ‘scandal’ unharmed and become the invisible man, is remarkable. Kristen on the other hand, has become the Antichrist.

Let’s look at the facts here; he is married. With two children. And is 41. And was the director of a film in which Kristen was starring which gave him power and control to an extent over some of Kristen’s actions. He isn’t blameless yet is coming off as some poor victim who fell prey to Kristen’s wicked sexual advances. All focus on Rupert so far has been concerned with him ‘trying to save his wonderful marriage’ and praising his directing abilities and skill as a father. The press however have decided to use Kristen as a punching bag and are talking about her suspicious beady eyes, her inability to commit, her desire to self combust, her rampant sexuality and how she has cheated before. It makes me sick to my stomach that time and time again, men get away with cheating on their wives and the women involved take the fall – Imogen and Kristen are just two recent examples where the men are hailed as fucking heroes and poor tragic scamps – ‘men will be men’ and magazines and newspapers rehash articles about how hard monogamy is for our cavemen and bring out some leathery old guy who brags about his shagging conquests and pisses all over the concept of happily ever after, but the women are torn apart.

In situations like this, women seem to be judged much more harshly; perhaps because the behaviour subverts the traditional way in which women are expected to behave – all virginal and delicate like for example. Women get blamed for breaking up happy homes and wrecking lives but it takes two to do that; you don’t go looking elsewhere if you are completely happy at home. Regardless of how much much Sanders loves his wife or how ‘heavenly’ his children are, he still chose to carry on with Kristen. He made that decision. Wasn’t forced. Didn’t have to. Chose to. As did she. Are we happy for women to pose half naked on a magazine cover, happy for them to bend over in music videos or rub themselves down with soapy water, and yet not ok when they actually turn out to be sexual beings?

Yes, they both cheated. BOTH of them so why is it just her that is shouldering all the blame? Also, do you know where is more private than a public car park to conduct your dalliances? ANYWHERE ELSE. Seriously, come on!