You Make It Too Easy 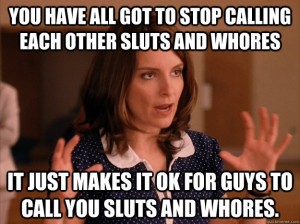 If Mean Girls taught me anything, it’s that we need to be nice to be each other. As Lily Allen points out, it’s hard out there for a bitch and girls attacking girls just makes it a whole fucking lot harder.

This idea leads me nicely on to the Kim Kardashian/Vogue drama that’s threatening to blow up the internet. Anna Wintour put Kim K and Kanye on the cover of April’s Vogue, although from the reaction you’d be forgiven for thinking she’d put a naked Putin on the front, draped in a rainbow flag and standing on a stack of ABBA albums.

The cover is lovely. 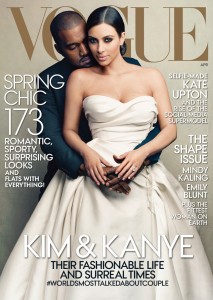 That dress! That ring! etc etc. It’s not a bad photo of the pair. It’s not insulting. And yet we have celebrities such as SMG (Buffy, how could you?) tweeted that she is cancelling her subscription. Elle and Vanity Fair got in on it. Seth Rogen and James Franco, still riding the lols of their Bound cover, spoofed it and yet no one seemed to get the point they were helping to make. Kim K is big news. Kim K and Kanye land Vogue and the world goes cray and does more for issues sales than any marketing campaign could have done.

Im not a massive Kim K fan. I think she is beautiful and always rocks a pencil skirt but she doesn’t impress me on a ~ deep level. Yet I’m all for living and let live. She wanted to be on Vogue. She is on Vogue. Girl done good, no? Why all the hate and drama? Why is it ok for Rihanna to be on the cover of Vogue but not Kim? Rihanna of cavorting about half naked in her videos fame, glamorising drug use, tattooing every inch of her body and releasing songs about sex (are you big enough?) fame? It seems that we are quick to pick our battles. Some women good, others bad? Why is Kim K a punching bag?

I’ve heard people say it lowers the tone of what Vogue is about. Materialism? Consumerism? Fashion? I’m pretty sure we could use those words to sum up the Kardashians. I’ve heard people say that Kim isn’t as successful as some of the other stars that have graced the covers. I think her millions in the bank, clothing line, perfume range and make up would suggest other wise but how are we defining success here?

I won’t be buying Vogue but not because Kim is on it. Because it sucks. Because it encourages body shaming. Because they photoshopped the shit out of Lena Dunham and chose a shot of Melissa M that covered her curves. Because Adele has been on it twice and both times she has been slimmed down or had her body missed out altogether. Because it makes my head and heart hurt at the false need conciousness it incites in its readers.