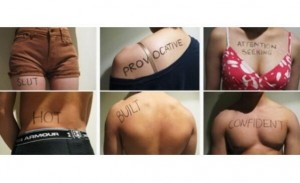 One of my favourite girls was telling me a story recently about the way in which she was treated when she turned down a boy. He called her all kinds of names like ‘slut’ and ‘bitch’ because she had the audacity to resist his charms. It got me thinking, what’s in a name? Now this girl is none of those things; she is feisty, independent and knows her own mind but maybe that’s what scared him?

Reputational labelling is something that makes my blood boil. When a guy puts himself out there and isn’t afraid to be sexually liberated, he is a legend. He gets the kudos and can go about his business, no damage done. When a girl isn’t afraid to say the same things though…wow, different story. We live in a culture where rape victims are treated more harshly than rapists, where females that show some skin are ‘asking for it’ and where having a drink with your mates on a Saturday night makes you ‘fair game.’ It’s hideous. The differences between the way in which we, as a society, respond to the actions of men and women is shocking. Times are a-changing; we have men feeling the pressure to look good and conform to certain bodily ideals, sure but the main bulk of the pressure to be beautiful still falls to us females. We have to be everything, at the same time. We are smashing stereotypes and making our mark on all kinds of industries which is amazing but there is still this pressure to look good, and be good whilst doing it.

Being a girl has it’s merits, don’t get me wrong but if you were visiting from outer space, you’d be forgiven for thinking that we were the inferior shapes here. The worst insult we can throw at a boy is to call him a girl. We have created a society where, in order to destroy a woman, you target her looks and sexuality. You call her a ‘slag’ or ‘ugly’ to leave a mark on her sense of self. Just this week, we have leading a female entrepreneur posing posing in her pants to sell a product; I’m all for body loving but ask yourself this, would we see Alan Sugar or Richard Branson in the same position? Do we think they sit through hair and make up before speaking out in public? Do we see male lawyers being critiqued on their outfits on court steps? Do we see male politicians with twitter accounts discussing their hairstyles in the House of Commons? No, we don’t.

It’s simple really. We have managed to move forward in terms of what’s available to us, what we can do and what we will do but we are still held back by the constraints imposed on us in terms of our appearance and virtue. We are expected to be sexy but not sexual. We can run the world, but it needs to be done in heels. This is a cage dressed up as progress.

It’s sad thinking about my someday daughter and what she will inherit. I want her to grow up thinking that she can be anything she wants; astronaut, dog walker, whatever, I’m down with her choices but I want them to be made without her feeling that she is limited in some way. I don’t want her ever thinking that she isn’t good enough because she has a hair out of place or because her shoes aren’t in vogue but that’s the hand we seem to have been dealt. We have pushed passed certain barriers only to smack straight into a brick wall. We might be able to vote and own property but we aren’t home and free just yet