‘A Pedestal Is As Much A Prison As Any Small, Confined Space’ 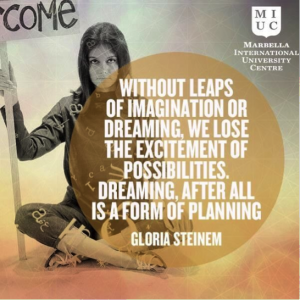 ‘Heroine – a woman admired for her courage, outstanding achievements, or noble qualities.’

Everyone has an idol – someone they adore and look up to. Mine is Gloria Steinem. I use the word ‘love’ a lot – I love my friends, my red lace dress, chocolate buttons etc but I don’t throw around the word ‘worship’ too often, and yet that’s how I feel about her. To me, she is more of an inspiration than anyone you’d ever find in Heat magazine.

Since the 60’s, Steinem has been fighting for gender equality; she has spoken out on everything from abortion (pro-choice) to pornography (‘blatant or subtle, pornography involves no equal power or mutuality’), same sex marriage (for) and FGM (‘the real reasons for genital mutilation can only be understood in the context of the patriarchy: men must control women’s bodies…and thus repress the independent power of women’s sexuality.’) 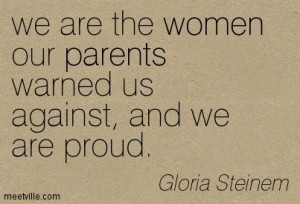 She has never shied away from taking on huge issues and expressing her opinion. She was open about having an abortion and why we need them to be accessible in society. She started up a feminist magazine (Ms.) after realising that the majority of glossy’s available to women were created and managed by men and therefore loaded with patriarchal bullshit and ideologies. She defined the term ‘reproductive freedom’ when she talked about the rights that women have to contraception and abortions and broke the mould when claiming that men can be feminists too. Think of an issue that us modern day feminists fight for and chances are, Gloria has had something to say about it. 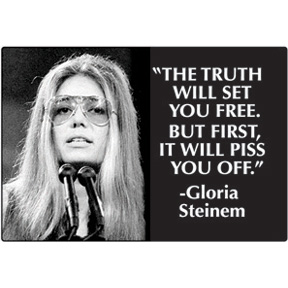 It was Gloria’s 80th birthday this week and she is still going strong, refusing to compromise on her principles and refusing to stop fighting for that elusive equality we are still sorely lacking. One of my favourite ever quotes from Steinem has to be this one,

‘I have yet to hear a man ask for advice on how to combine marriage and a career.’

What she did in that one sentence is highlight a massive issue that we have as a society – the unequal distribution of guilt and emotional responsibility in a relationship. Often inextricably linked to motherhood and the fact that it is still an expectation that women do the bulk of the child raising despite the fact that it takes two to tango, there is still this gross inequality in the way in which ‘wives’ and ‘husbands’ are treated.

‘Any woman who chooses to behave like a full human being should be warned that the armies of the status quo will treat her as something of a dirty joke. That’s their natural and first weapon. She will need her sisterhood.’

The face of feminism would look radically different without Gloria around. Because of her, we see discourse surrounding the rights to contraception in the public sphere, we have someone dedicated to bringing sexism to light. Gloria encouraged women to work, to have careers, to be political and present, to stand up. She encouraged us to have a voice, to use it and to not be afraid to challenge those in power. When I look at the women in position of power today, I feel a bit sad. We seem to have misplaced our voices in amongst the piles of crop tops and hot pants, and our ambition for change with an ambition to marry a footballer.

‘Whatever the question,” Gloria said recently, “women are part of the answer.’