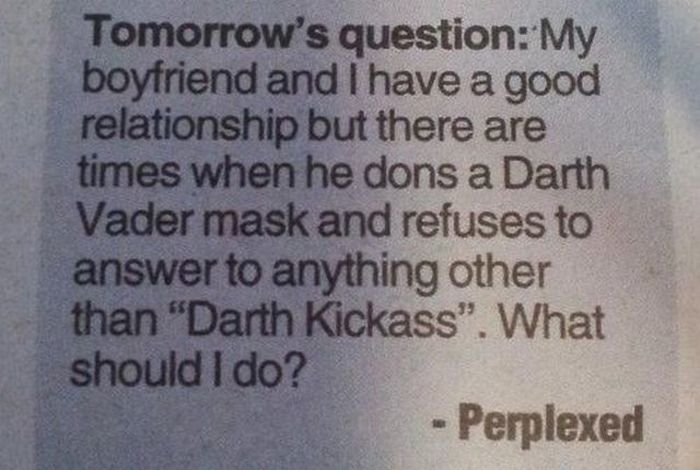 Writing about sex and feminism means my inbox is often full of questions (and dodgy propositions..) from minxes asking for advice. With that in mind, and a hand from one of my favourite babes, this regular feature was born. Welcome to ‘We Got This’ – a problem page/dear diary type affair where we will be answering any questions you might have about sex or feminism.

1. My girlfriend wants rough sex and has asked me to initiate and dominate her but I feel uncomfortable. It’s not that I don’t want that kind of sex but it goes against everything I’m taught as a guy – not to abuse or hurt women so I can’t get into it. What should I do?

MUNGLE: Whilst you are completely correct, no one deserves to be abused or hurt, what your girlfriend is ASKING you to do is dominate her as part of a sexual act. The difference being that you have her consent, are doing something that will please her (and probably ultimately you) and it’s something you can enjoy together. Rough sex has a huge scale of enactment, from enjoying ‘nasty’ words, to giving orders, to using light force all the way up to full on bondage, humiliation and shaming. It’s important that you both understand what the limit is, and neither of you cross it without discussing it first. That in mind, this is something you can totally enjoy and let your imagination go wild with – as long as you are BOTH enjoying it. On the other hand, sex is a two way street and if you are really uncomfortable with dominating behaviour then you both need to find a new alternative. xxx

I’m finding it really hard to deal with the sexism in my place of work. I am constantly being undermined by male co workers or given menial tasks to do, despite being more than qualified for my position. My male boss calls me patronising names like ‘angel’ and ‘sweetheart’ all the time, rubs my shoulders and makes jokes about my mood swings but NEVER treats the male colleagues like this. I don’t want to be seen as a nag but it is really making it hard to enjoy my job.

EM: I’m sorry love, that sounds hideous. Firstly, you are not a nag and the idea that women challenging sexism somehow makes us moaning bitches is bullshit – a way of ensuring that we feel too trapped by traditional notions of femininity to act on our gut instinct. You wouldn’t ignore racism or able-ism in the workplace, so why is any form of discrimination acceptable? The treatment could be a result of ingrained ideas about the role of women; that we are somehow delicate, emotional flowers that need to be molly coddled at all times and handled with care. This doesn’t excuse it but goes some way in explaining it – it’s our job to subvert and resist these. I would suggest talking to your boss; say that you would prefer it if he didn’t use those terms of endearment with you as it makes you uncomfortable. When he passes you a task you feel isn’t suited to your skill set, speak up. Challenge the idea that women should be seen and not heard. If this doesn’t work, speak to someone more senior. Keep a note of all of the comments and situations so that you can go in with evidence and be professional; sometimes it’s hard to rein in the anger/emotion when you feel frustrated but try and make sure you present what’s happened in a clear and concise way. State that you expect the issue to be taken seriously and would like to be kept informed of any actions they are taking. Follow up if you don’t hear anything. Standing up for yourself isn’t anti feminine.

I want to go down on my partner but she won’t let me. She said she hates it when I do because it doesn’t feel good. Any tips or advice?

MUNGLE; Sex is all about communication , she’s honest enough to tell you what she doesn’t like so now ask her what she does like! The best advice I’ve seen is to treat the clit like a penis, so (if you are a guy) think about what you’d like in a blow job – I’d like to add here that girls don’t need ‘licking out,’ – the most sensitive part for the girl is her clit, which is on the outside! Try lots of rhythmic licking around the clit without actually touching it, this will build up suspense, follow with tiny circles around the clit itself (which should be a hard little nub by now) varying in pressure. This may encourage an orgasm. Try sucking the clit itself too (think about how a blow job feels) varying speed and strength. Also try using your fingers inside her at the same time, whilst your tongue concentrates on the outside. Let us know how you get on!

I am really into being dominated in bed but I worry that this makes me a bad feminist! I know that some feminists might see it as giving in to male desires. What do you think?

EM: Feminism is about choice, fighting for equality and ‘the radical notion that women are people too.’ You are not a bad feminist for getting the sex YOU enjoy and want; you are choosing to be submissive in the bedroom because it WORKS for you and gets you off, so what could be bad about that? Sure, if you were on your knees and being used as a sex doll just because he was into it, then yeah, concern but if you are happily consenting to any sexual activity, then it’s all good. We could get into how a lot of the sex we have is linked into misogynistic ideals and pornified perspectives on what is ‘hot’ and ‘not’ but ultimately, I think that if it feels good, you are up for it and both people are consenting, safe and happy then nothing is really ‘anti feminist.’ Also, being submissive IS powerful. It takes a fuck load of confidence and strength to hand over control like that and trust another person with your body and boundaries. Personally, I like a guy taking control; pulling me hard against him, whispering in my ear what he wants to do with me etc. and I don’t think we should apologise for our sexual preferences. Interesting sidenote; a recent twitter discussion highlighted how we often use the bedroom as a place to subvert the traditional roles we play. So, I am pretty confident and sass-tastic in life but in the bedroom, want to play a different part and have someone take over. It’s like sexual escapism. Don’t ever feel that you have to justify the things that make you happy doll.

If you have any questions for us, feel free to get in touch! You can email em@anygirlfriday.com or catch us on Twitter (DM if you are shy!)