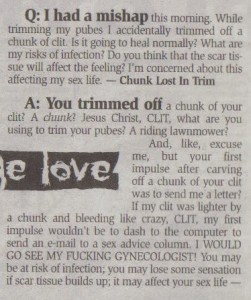 I’m planning on sleeping with my boyfriend for the first time, but I’m worried about it hurting. I am ready and want to do it but the thought of it hurting is putting me off.

Mungle: I’m of the belief that if sex hurts, you’re doing it wrong. So how uncomfortable you feel during and after your first may well depend on your partners history. However, that does not mean hold out for someone whose been around the block >_< just be prepared for a bit of bumping and prodding around at first, and slightly more if you are both new to it. There’s nothing to be afraid of, if you’re comfortable enough with your partner to have sex then you should both be relaxed enough for it to not be a painful exercise. Take the time to enjoy each other first, explore each other’s bodies – and your own – until you are completely comfortable with each other and know what gets each other in the mood… Then when you’re both ready (in mind and body!) go for it, slowly and with communication throughout. Don’t be afraid to say ouch, or stop and start again in a different position if you need, there’s no ‘right way’ to have sex, especially for the first time. Just do what feels right, and neither of you should continue if the other doesn’t want to. Enjoy xxx

Em: I’m all about going digital babe; my fear is that if I was stranded on a desert island with no Netflix or Kindle to keep me company, I’d need to practice some self love to pass the time. The chance of a Rampant Rabbit AND enough batteries to see me through until I get rescued by fit pirates is slim to none so I think it’s good to know what works for you in terms of finger fun and double clicking your own mouse. I’m sure you already practice self love and know how to get yourself off, but if not, stop reading and go take some time to acquaint your fingers with your clit. Don’t blame me if you start cancelling all social arrangements and end up tiring yourself out though. If you really want something buzzy, I’d suggest starting small – get a lipstick bullet type vibe that you can hold against your clit. There are so many vibrators on the market now, I’m only surprised that they haven’t made one that can knock up some pancakes for when you’re done. Check out www.lovehoney.co.uk

for some awesome deals and suggestions or talk to the lovely ladies in Ann Summers – they know their stuff and can suggest something to get you started. There are so many to choose from so think about what you’re after; powerful? quiet? discrete? something solely for clit contact or are you after a good all rounder? The Rabbit is legendary and manages to be better in bed than most men I’ve met so that’s always a good bet. Just don’t try and get it through airport security. And if you do, don’t try and pretend it’s a children’s toy because they totally see through that. So I’ve heard anyway. Happy hunting doll!

Don’t think I’m an idiot but what is ‘rape culture’ and why is it such a big deal?

EM: You are not an idiot; how does anyone learn anything new if they don’t ask or find out? Rape culture is a term used to describe the way in which society trivialises and normalises sexual assault and rape. It is linked with the way that victims are blamed and held accountable for some reason and shamed into feeling responsible for being attacked. Rape culture exists in the fact that rape jokes are somehow ‘hilarious,’ in the way that when reporting rape attacks, media feel the need to include pictures of the victim drinking or wearing something ‘provocative’ thus inviting judgement and that old ‘well, she deserved it’ mentality to shine. Rape culture is hideous and ensures that rape is incredibly under reported, has low conviction rates, is often not taken seriously and victims are routinely questioned and shamed into feeling guilty for what happened to them. This is a really good definition, from ‘upsetting the rape culture’ website: “Rape culture includes jokes, TV, music, advertising, legal jargon, laws, words and imagery, that make violence against women and sexual coercion seem so normal that people believe that rape is inevitable. Rather than viewing the culture of rape as a problem to change, people in a rape culture think about the persistence of rape as “just the way things are.” This is ultimately the problem; women modify their behaviour to ‘avoid’ being raped – this is so internalised that we don’t even question it: walking home in groups, avoiding dark alley ways, thinking we need to change the way we dress or drink. It’s all symptomatic of a culture where we teach victims to avoid attack, rather than teach people not to rape or sexually assault others. In addition, we peddle the ‘stranger danger’ myth that keeps women scared and fearful which doesn’t correlate with the fact that 90% of rapes are committed by people known to the victim. Be angry about it, don’t put up with rape jokes, don’t tolerate people trivialising rape.