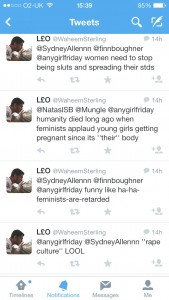 ‘Rape culture, loool’ – this is a comment someone tweeted to me recently; completely out of the blue, unprovoked and just because he felt entitled to throw himself into my mentions and start calling women ‘sluts’ and telling me that ‘sluts’ deserve to be raped. He went on to tell me to ‘get raped’ myself and that he hoped it would be brutal but I’ll spare you those screenshots. 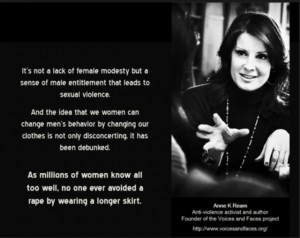 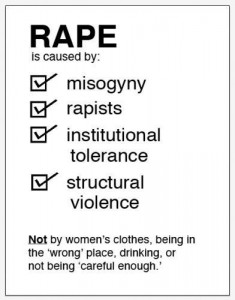 Rape culture is when society trivialises and normalises rape; the cynical part of me will always argue that this is a result of a patriarchal ‘old boys’ network where men look out for each other and ignore indiscretions that do not inconvenience them. Furthermore, society is built on a bullshit foundation of sexism and objectification of women; where we are viewed as little more than holes to be claimed, mouths to be filled and bodies to be worn out. Society teaches men that by default of being born with a penis, society somehow owes them a woman, a prize. It’s evident in every Superhero movie, every music video, every magazine ad, tv show. It’s the ultimate fairy tale that we are sold from birth; we should be grateful for male attention, swooning at the prospect of a life spent married off and ‘settled.’ Anything other than that is considered deviant, confusing, not ‘right.’ 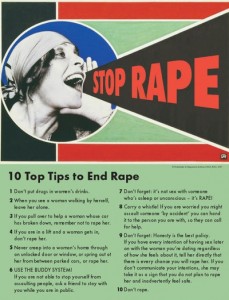 If you are as big a twitter fan as me, you’ll have seen the #yesallwomen trend and read about the horrific things that happen as a result of rape culture, as a result of a society where victims are interrogated before being supported and what you were wearing has more bearing than why some fuckwit felt entitled to attack you. Every time someone asks ‘what were you drinking?’ Or ‘did you lead him on’ they are contributing to a system that punishes victims and trivialises rape. Every time someone makes a comment about ‘sluts’ and ‘deserving’ to be attacked, they are perpetuating a society where rape conviction rates are hideously low, where support for victims is hideously pitiful and where women are scared to report rape for fear of their Facebook photos of a night out being used as evidence of their lack of morality against them. 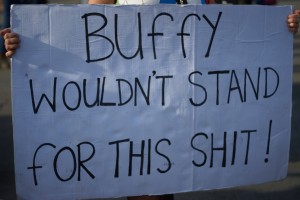